The following is the testimony of my experience growing orchids for over 50 years will help answer a lot of questions you may have about the hobby.​

Most orchids are epiphytic.

epiphyte - a plant that grows on something else for support but not food.  They get all moisture/nutrition from the air or rain in nature.  The epiphyte's roots are exposed to the open air and light. This encourages photosynthesis in the roots and prevents them from staying too damp for too long.

Most orchids would sit cheerfully on the bench in a greenhouse and grow with no pot at all provided you give the same care to them as you do to those in pots. Trouble is they would root right there to the benches!  Since it is our nature to want to put them in or on something we can move around when we want to, the clear plastic ventilated orchid pot was designed.

These clear slotted pots showed up when the large asian growers found them to be a better way to grow them for merchandising.  These orchid pots allow you to easily observe the moisture content of the potting mix to avoid over watering. They also allow light to reach the roots for photosynthesis, and give them plenty of access to fresh air, sorta like what they experience growing on a tree limb in their natural environment.

So, without growing them on trees ourselves, we can best mimic that environment, monitor the moisture, and maintain a certain level of convenience by keeping them in clear plastic orchid pots with plenty of ventilation.  From what I have seen, it seems the more ventilation the better. 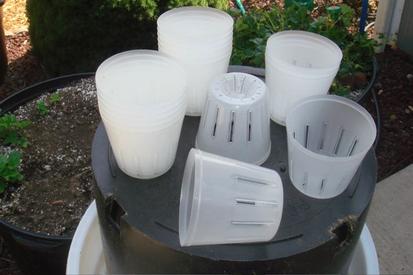 This is a section from an epiphyte.  The white thing in the middle is the center of the root, all that green area is a transfer/store area, and the white outside is the gathering material that picks up moisture and nutrients and light and transfers that to the green area.  The green area even has air pockets in it.  Old roots usually lose the outer white and green areas and only the center of the root remains but turns black. 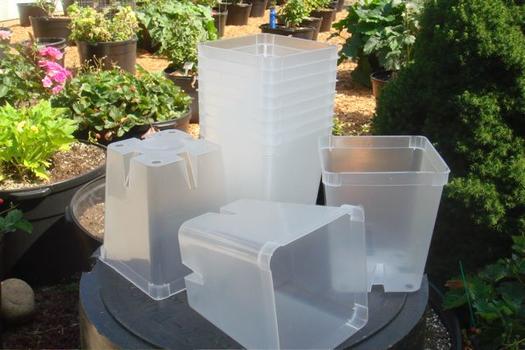 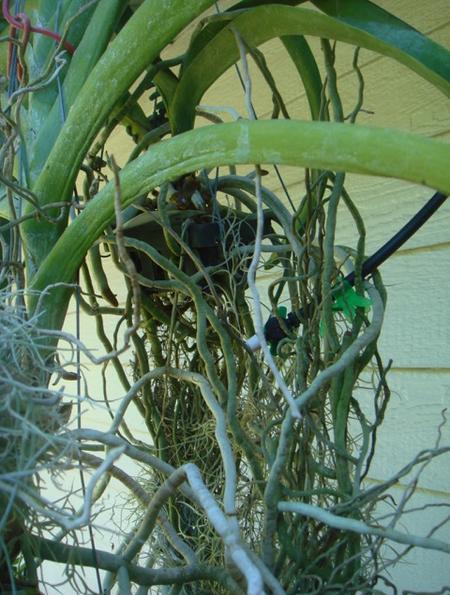 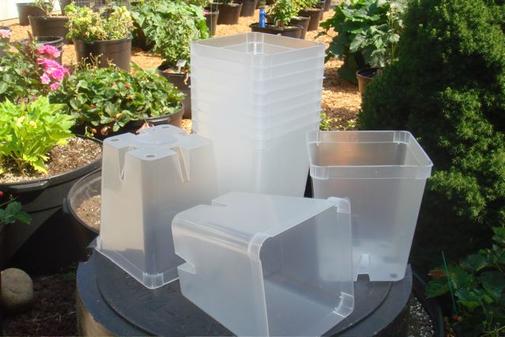 My Narrative on the Introduction and Origin of the

Let's go way back.  In the 1960’s, I was the typical orchid newbie, in that I was already a gardener, and I had found out that my garden did really well with lots of water and fertilizer.

When I started growing orchids there were very few orchid experts around in the San Diego area, most of them grew cymbidiums.  Cattleyas were grown commercially by huge growers with huge greenhouses for cut flowers mainly and they were flowered at  Easter and Mothers day for the most part.

So my early acquisitions were cymbidiums.  They also loved the "lots of water and fertilizer" treatment.  One of my favorite cymbidium growers had a small greenhouse where they also sold a few other types of orchids, but I could see I needed a greenhouse for catts and phals, so, I built a small greenhouse.

After my greenhouse was completed I still needed something because these beauties did NOT respond to my usual heavy handed watering and when to water became an issue.  Digging around in a pot with your finger over and over was the only way to check how wet the potting  mix was so I started looking for a better way.  I think I killed every phal I ever purchased.  :(

After months of experimenting I saw a commercial in the AOS Bulletin for clear pots, but it didn’t last long.  I was able to order a few, but when I wanted to order more they were already out of business.  I called the company to see if there were any left, but it seems the indifference of the orchid world prohibited the sales needed to support all the investment.  Many thousands of dollars had been invested in new injection molding dies to make the three sizes of pots they offered and with manufacturing, shipping, advertising and such the sales were just not enough of a payback on the investment to pay for it all.

About that time, Ray Rand came  out with some “virgin  plastic” air pots but they had a tendency to crumble in sunlight after only a very short time.  Over the years those molds  have been sold several times and a newer plastic is now being used that does last well.

I was purchasing my regular pots from McConkey at that time and was a home distributor for their regular line of black and colored pots.  So I approached Jack McConkey to see if they could make “clear pots” using one of their existing dies.  Jack looked into it and said he would give it a try but gave me an unbelievable minimum order size they would need to make it possible.  He also added they would have to add to the plastic formula to keep the pots from disintegrating in a short period of time.  I began to see why the other manufacturer had a difficult time!

So my first order from them was for the 5.5NCUV.  I had them in boxes stacked everywhere at my home/backyard hobby business in Chula Vista CA.  I still offer that pot today.  :)  Lately, I have offered that pot with even more holes added, drilled by hand.  Because of my heavy watering tendency, it’s my favorite pot, the 5.5EXTRA.

Anyway, the original idea was to improve the ability to monitor the moisture by being able to “see” inside the pot.  I found that to be  a huge impact on my luck with catts and phals, there was an immediate turnaround.  By “seeing” inside the pot if I saw any moisture at all I did not water and I found after some unpotting and maintenance that even if the outside looked dry there was still wet bark in the middle of the pot,  so based on the weather I could easily go up to three days more before watering after seeing the outer potting mix dry.

So all this happened while the question was about watering better. But all the users later on noticed better root growth too.  Even carniverous plants grew better in them.

This is a brassavola/laelia/cattleya hybrid growing on nothing but a manzanita stick, outside on the porch, with about 2 hours direct sun in evening.

We offer a large selection of clear plastic orchid pots!  Click the picture or link below to browse our merchandise.  :) 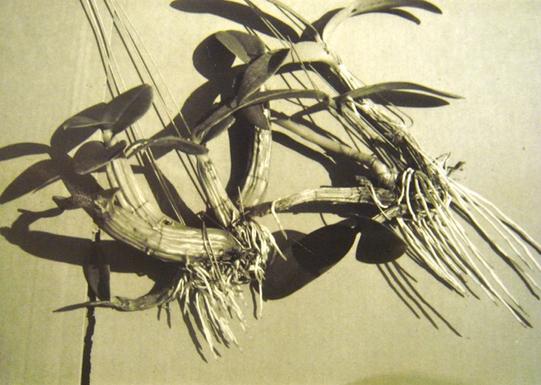 This is a picture of a large commercial wholesale grower with all the latest growing techniques.  The grower of the plants in this picture sells about 5,000,000 plants every year.

Most of these plants have spent their entire life growing in moss or bark in the clear, flexible, slotted plastic pot.  They use trays to keep them upright with big slots to allow air and light to the pots.  It is impossible to grow them like this without something like these trays to hold them up because they become too top-heavy.

It is important to note that most of these plants are never watered overhead.  They are sometimes never “watered” at all, but grown in greenhouses with elaborate systems that keep a very high level of humidity and high temperatures all the time.  Others might be grown in hydroponic tables.

When ready to go to market the plants, pot and all, are dropped into a clay or ceramic pot with no holes, no air, no light. These heavy pots are basically for ballast to keep the plants upright in the sales tables in the retail stores.  When you pick them up at retail, you will probably find a small ball of moss growing around the roots, covered by another layer applied so they can fit the “ballast” pot at shipping time.  The mistake novice orchid growers make is keeping them in these pots and medium when they take them home.

With even minimal care they will probably last 3 to 4 months and up to a year if not watered very much. Even though they are really great plants, they are doomed if not changed into a more suitable mix/pot combo that will extend their life.

Sold inexpensively at markets you are getting nine months of pleasure, then the marketers expect you to toss that one and go get another!  If you want your orchids to last for years, you only need to address these issues and find a suitable situation for your orchid to succeed. 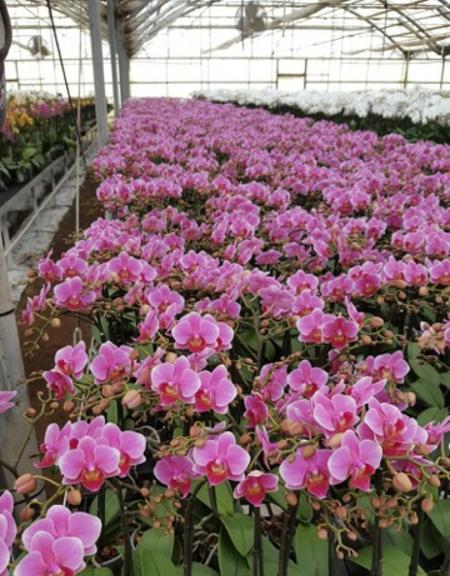 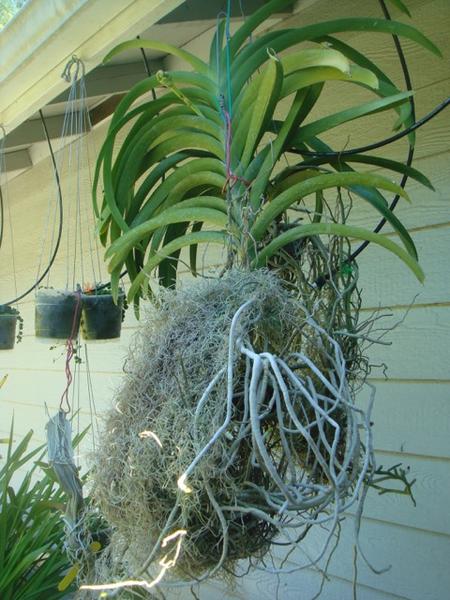 Here’s one growing nothing but a piece of wire.

Do epiphytes need light?  Wikipedia - "Epiphytic plants use photosynthesis for energy and obtain moisture from the air or from dampness on the surface of their hosts.” 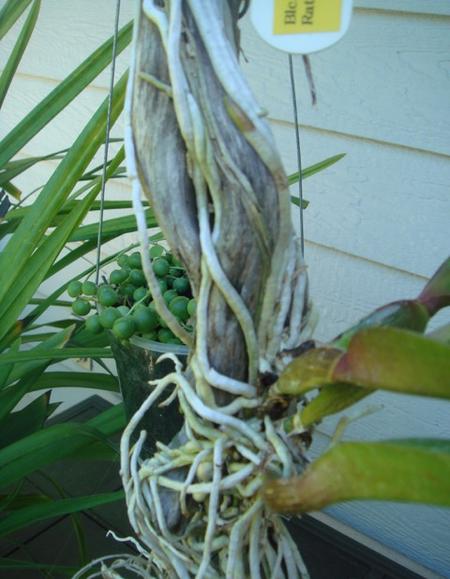 Do they "need" a pot?  Nope!  Do you see any pots in this picture?  Yup, there are two plants in this picture, two pots, and two flower spikes growing outside in the front patio in Oregon 8/10/2016